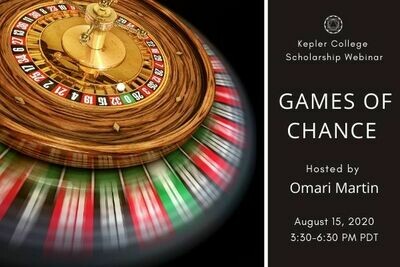 How do you use astrology to identify opportunities to win at horseracing/dog racing, blackjack, poker, Russian roulette, slot machines, bingo/keno, sports gambling, and the lottery?

Bring your questions to a panel discussion by five astrologers who have successfully used astrology to increase their odds of winning. They will present the techniques they use to win, the astrological science behind it, and the pitfalls inherent with games of chance.

Omari Martin, MAFM, LPMAFA, NCGR-PAA I is a certified professional astrologer and a life member of the American Federation Astrologers (AFA), President of The Friends of Astrology, Inc., Treasurer of the Astrology News Service, and Chairman of the board for Kepler College. He has a Level I certification through the National Council of Geocosmic Research – Professional Astrologer’s Alliance. He is a life member of the Organization for Professional Astrology, a certified teacher with the Church of Light – Brotherhood of Light lessons, and a certified integrative NLP practitioner through the Association for Integrative Psychology.

His academic credentials include a Bachelor of Business Administration – Accounting degree from Howard University and a Master of Accounting and Financial Management degree from Keller Graduate School of Management. He is currently pursuing a Doctor of Philosophy in Business Management specializing in Accounting at Capella University. He is the owner of SOULAR WISDOM™ a human personality and behavior consulting business that focuses on Natal and Electional Astrology and ASTR!PRENEURS*IP® that provides consulting and coaching services to astrologers and other entrepreneurs for business development, profitability, and long-term strategic growth. He is an adjunct professor of accounting & finance at Harold Washington College in Chicago, IL.

For over 55 years (and 55,000 clients!), Robert Glasscock has been a Los Angeles-based astrologer consulting with clients from over 122 countries. For many years he authored over 250,000 words annually in “American Astrology Magazine’s” monthly and Annual Yearbook issues for Publisher Joanne Clancy. His writings for newspaper columns, magazine articles and anthologies have been cited by Liz Greene, among others.

Having begun to build his own clientele, Robert was invited to study with Linda Goodman in the ‘60s. Since she no longer saw clients (intently writing her second book), she referred her clients to Robert. He became an early member of Joan McEvers’ and Marion March’s Aquarius Workshops, lecturing there as well as national conferences and conventions. He’s been invited to address a variety of forums from the Bank of Beverly Hills’ after-work seminars to the UCLA Medical Wives Association to political, professional, media, civic and religious organizations.

"It amazes me to look back and realize, conservatively, that in 55 years I have worked with over 55,000 clients in person, by telephone, online and through correspondence. Often two, three, four or more a day.
“My favorite thing? Teaching. It’s such a joy to see many of my students go on to become terrific professional astrologers. Not because I’m so great. They were already good astrologers when they found me.
“But if I showed them some things they might not have learned elsewhere . . . or an approach to and philosophy of astrology that helped them find and define their own . . . then, wonderful. If I gave them something that made them better - I can say the same to them.
“Because it’s not only true that, ‘When the student is ready, the teacher will appear’ . . . it’s also true that, 'The teacher learns more than the student.'”

Julia Purdy discovered astrology in a used book store while in college. She happened upon an out-of-print edition of Heaven Knows What by Grant Lewi and her imagination was triggered. Her interest in this arcane topic grew over time and forty years later she is still at it.

An alumnus of Kepler College, Julia has studied many different historical approaches. She has concluded that astrology is like the universe it tries to describe, in that you just cannot get to the end of it. She accepts that she will always be a student because there is always something new to learn.

Julia is the author of the book, The Jupiter Advantage, Astrology’s Path to Opportunity, published in the summer of 2020. It is the culmination of four years of research on how Jupiter and the Sun interact by sign in the natal chart.

Originally a self-taught astrologer from age 16, instead of following traditional educational paths such as University, Luke cho

se to study Astrology. He eventually formal studies at the Chiron School of Astrology in the late 1980s and his Practitioners Certificate with the Federation of Australian Astrologers in 1991, when he also became a Member of the APA (Australian Professional Astrologers Association). Luke's principal focus in Astrology has been around the “how” and “why” it works, the evidence, proof, and how this knowledge can be used every day to enrich and make for a better life.

Luke has been a consulting and columnist Astrologer for magazines such as Smash Hits, Star and Looks from 1988-96 and a teacher at the Chiron School of Astrology and at Inner Harmony in Cronulla. He was a regular speaker at SARS in Sydney for many years and spoke at the FAA Conference in Sydney in 1994 on Harmonics. After over 35 years’ of experience in both Tarot and Astrology, Luke is currently dedicating his time to consolidate his research and to writing.

Reese Robertson aka Ever Reese is a Baltimore, MD based astrologer, Sci-Fi Comic Creator-Writer, and Father of 4. Reese has been a practicing professional astrologer since 2010 and focused his practice on and within the Black Community. Reese is educated in Electional, Horary, Horoscopic (Natal) Western-Tropical-Sidereal, Mundane, and Political astrological Traditions. He has also studied and utilizes techniques from Joytish and Jaimini Vedic, Kabbalistic, Financial, Heliocentric, Huber School, and Psychological (Jungian) astrological systems & traditions.

Reese was taught astrology by Ra Akhu founder of the Cozmophyzix brand of Astrology. Reese is a predictive humanist conceptual astrologer his practice is focused on predictive scheduling, self-empowerment and conceptual-creative astrology. He is dedicated to spreading the knowledge of astrology to the Black Community, especially via the brand Cozmophyzix.

Reese has produced over 75 Astrological Blogs and has Hosted and Produced Astrological based Podcast and Talk Shows such as The Cozmophyzix Show on BlogTalk Radio, and The Cozmos After Dark on Cosmic Council Radio. Reese has appeared as a guest on the live Astrology Television Show; Astrology/Numerology Now and numerous podcasts and blog talk shows such as The Cosmic Council, KnowTheLedge, I Am Astrology Readings, and etc.

The Cozmophyzix brand, system and philosophy are eclectic utilizing a mix of different systems and techniques that work consistently for the practitioner, echoing its axiom “The Jeet Kune Do of Astrology”. Reese’s motto is that Cozmophyzix helps to bring the Cozmo (What is above and within) to the Physical (What is below and without).