Life, Liberty, and the Pursuit of Contentment: Astrology and the Stoics 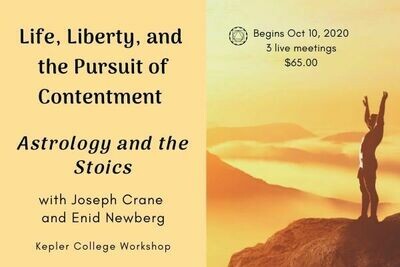 People try to get away from it all—to the country, to the beach, to the mountains. You always wish that you could too. Which is idiotic: you can get away from it anytime you like. By going within. - Marcus Aurelius

This course is being presented to coincide with Stoic Week (October 19-25) an international celebration.

The development of astrology in the West owes a great debt to the philosophy of the Stoics. Their depictions of human bondage and freedom, their quest for serenity, and their emphasis on the nobility of character continues to influence astrology’s techniques and astrology’s underlying understanding of the human condition.

This course begins with a three-hour workshop on Saturday, October 10 that introduces the main ideas and the astrological applications of the Stoics. The week of October 19-25 is “Stoic Week” - an annual event that invites participants to ‘live like a Stoic for a week’. It is run online and is completely free (and has had over 20,000 people participate since 2012). The Modern Stoicism group has developed meditations, contemplations, and exercises to give people a hands-on experience of the pursuit of greater understanding and serenity – and positive action in the world. While not required, workshop participants are encouraged to participate.

This workshop continues on the two Saturdays (October 31 and November 7) following Stoic week to process, exchange ideas, and apply what they have learned to astrology! There will also be an online classroom for participants to connect with each other and post their observations.

Joseph is the author of A Practical Guide to Traditional Astrology (1997), Astrological Roots: The Hellenistic Legacy (2007) and Between Fortune and Providence: Astrology and the Universe in Dante’s Divine Comedy (2012). He publishes a monthly astrology newsletter that currently profiles historical and contemporary public figures. Newsletters and other information can be found at The Astrology Institute. Joseph is also a psychotherapist and a Buddhist practitioner. He lives in Rhode Island. You can find out more at his website: https://www.astrologyinstitute.com/

Enid Newberg, MA Whole Systems Design, discovered astrology in the 1970s when she went with friends to listen to a lecture by Dane Rudhyar. From that point on she was hooked. She particularly enjoys introducing students to the dynamic aliveness of an astrological chart. She is also fascinated by astrology's history and philosophy as well as its intersection with magic, culture, and spirituality.

Enid became involved in the dream of creating an academic college where astrology would be openly taught and joined the board of Kepler College in 1993. She was president when the college first opened in 2000 through 2001. In November 2004, she rejoined the administration and was president again from 2006 until 2019. She is still a member of the Board of Trustees. She loves to teach and work with clients.