Apr 11. Psychological Astrology as Illuminated by the Tarot (Qabalah) 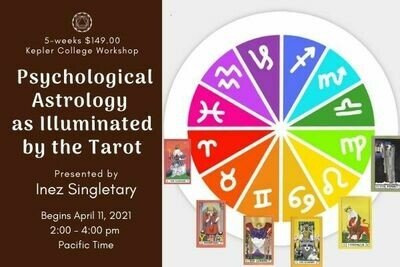 Astrology tells the story of every human that lives, has ever lived, and will live. Psychology is the science of mind and behavior. Tarot encapsulates the science and mind of behavior as revealed by Qabalah.

Each of the 22 Keys of the Major Arcana of the Builders of the Adytum deck is assigned to the 10 planets and the 12 signs. Therefore, each of the signs and planets has a picture that has a deep history. The roots of the Tarot are not fully known, but it said that a group of wise men from Africa and Arabia met at Fez in Morocco and devised these cards so that they could share their wisdom and science in a common language, though they were of different tongues. Their compendium was not only composed in the pictures of Tarot, but a sacred geometry that included diagrams, like the Tree of Life, and reference to a number, color, and astrology. They even had Tarot Keys for Uranus, Neptune, and Pluto, which were not yet discovered.

The pictures point to archetypal principles that give insight into the psychology of the signs and planets. Tarot is said to evoke thought. This is how the Tarot is “read”. A Tarot Key or combination of keys speaks to the observer and thereby is interpreted or expounded. Because the Tarot evokes thought, we are enabled to get to the root of astrological symbolism that may have been lost or obscured by the perpetuation of some of the errors that have slipped into popular astrology.

This course will be comprised of 5 sessions where we will cover only the 6 Tarot Keys which represent the first 6 signs (and houses) of astrology, the below hemisphere of the chart. I consider this portion of the chart to be the vessel that receives our experience and turns us into instruments that further the cause of the cosmos.

The use of the Tarot Keys enhances intuition and receptivity. We shall take 3 – 5 minutes to meditate on the Tarot Keys. Then we can spend 5 minutes writing our impressions and thoughts. This will enhance receptivity to the message and might activate a personal message.

These signs and this portion of our charts represents what we are receptacles for and how we are using our internal guidance system. The Tarot Keys help us to be in touch with our spiritual psychological senses, insight (Aries and Key 4, The Emperor), intuition (Taurus and Key 5, The Hierophant), inner dialog (Gemini and Key 6, The Lovers), inner feelings (Cancer and Key 7, The Chariot, heart, spine and will (Leo, Key 8, Strength), and healthy integration and instrumentation, work or service, Key 9, The Hermit.

In Women Who Run with the Wolves, Clarissa Pinkola Estes says, “we call upon our intuition and instincts in order to sniff things out. We use all our senses to wring the truth from things, to extract nourishment from our own ideas, to see what there is to see, to know what there is to know, to be the keepers of our own creative fires.”

5 of the 6 Tarot Keys represent the senses. Aries is sight, Taurus, hearing, Gemini, smell, Leo, taste, and Virgo, touch. It seems to follow that Cancer is the 6th sense which sums up the sense-based experience as feeling. Cancer and the Chariot inform us that our feelings are key to our Inner Guidance System (IGS)The Moon is the rule of Cancer, and we can say that the half-moon is shaped like the vessel. These signs in are aspects of our IGS, Inner Guidance System. The goal of this course is to sensitize people to their inner psychology as IGS.

PRESENTER:
Inez Singletary began her astrological studies in 1976 with Jerome Rainville in New York. When she expressed her excitement for astrology and a need to know the basis for interpretations to her Sagittarian brother, Rainville came up with a brochure for The School of Mystical Sciences. Inez thought she was going there for astrology but instead found herself in a course that taught Tarot. It was there she was introduced to her favorite principle: The Universe is orderly even when it appears to be in chaos.

After Inez moved to Los Angeles in 1979, she found an excellent teacher and mentor in Robert Glasscock. She was privileged to be among a small group of students who studied under Bob weekly for several years. Bob chose Inez to take over the Lunations column for the astrological magazine Aspects. She wrote the column for Aspects and continued distributing her column Email after Aspects stopped publishing. Inez now writes the New and Full Moon Lunations for her website, Many Moons Astrology. She has never missed writing for the new and full moons since she inherited the column around 1985, that’s 35 years!

Inez has published in The American Astrologer and has written a book called, Making What Your Means Can’t Buy. Inez has also taught astrology to her own students and at astrological conferences and organizations.