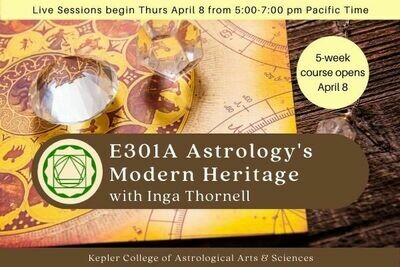 This class offers a survey of the history of astrology from the late Renaissance to modern times, primarily in the West.

Astrology was hugely popular from the late Renaissance into the mid to late 1600s. But during the 1700s, astrology began to be ridiculed as a superstitious and silly activity. It didn't go away, it just went underground into secret societies and survived on the fringes of society.

In the 1800s, however, with the rise of spiritualism and then the influence of the Theosophical Society in the 1870s there was a renaissance of interest in both Western and Indian (Vedic) astrology. Unfortunately, this also created a backlash and increasingly astrology was lumped in with laws against any kind of fortune-telling. This hastened the rise of modern psychological astrology that focused on character development rather than forecasting. In the 1960s and astrology had another resurgence resulting in the foundation of many of today's astrological organizations, including NCGR and ISAR (the American Federation of Astrologers had been around since 1938). Interest in astrology's heritage also took hold during this period since so much information had been lost.

The 1960s and 1970s saw an increase in interest in both new techniques and in revisiting older material. Uranian Astrology, Evolutionary Astrology, Moon phases, the 12-letter alphabet, and working with asteroids are samples of the new approaches. At the same time, an increasing number of prominent astrologers began acquiring the education they needed to translate and understand Hellenistic and Medieval material. The current interest in traditional astrology traces directly to their dedicated work.

Required books can be found on under the History section of https://keplercollege.org/index.php/required-books-for-courses

In this course, students will:

This course can be taken as an elective for the Diploma program and will also count toward a certificate in alternate traditions.

Required books can be found at
https://www.keplercollege.org/index.php/required-m...

Registrations made after 4 PM on Friday will be processed the following Monday (excluding holidays).