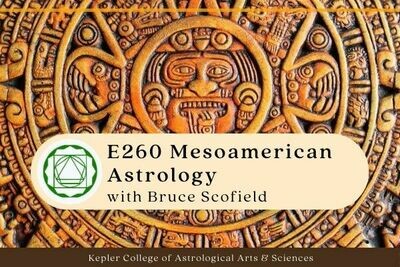 Registrations made after 2pm on Friday will be processed the following Monday (excluding holidays).

In Mesoamerican astrology, time serves as a sign. The basic unit of one day, one rotation of the earth, is the foundation on which other units rest. The core of time-based Mesoamerican astrology is the 260-day astrological calendar. This time unit has links to many astronomical cycles and was used for character description and choosing times for activities such as business trips and political or religious rituals. This 260-day calendar operates on several levels, one being the Long Count which structures a 5,125-year era – best known as the Mayan Calendar which “ended” in 2012.

This course will allow students to become acquainted with the nature of Mesoamerican astrology and its foundations in the cosmology and mythology of the several cultures that flourished in ancient Mexico and Northern Central America.