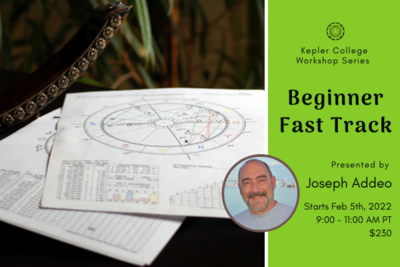 Want to learn more about the ancient art of Astrology and don't know where to begin? In this five-week workshop, you will be introduced to the profound symbolism found in the astrology chart. You will learn the structure of a chart and the glyphs associated with planets and signs. Using the charts of participants, uncover the meaning of these planetary combinations.

Instructor: Joseph Addeo is a professional astrologer practicing in New York City.
After extensive study with some of the most respected astrologers in the New York community he achieved Level IV Certification with the National Council for Geocosmic Research (NCGR). Joseph is an integral part of the community having been elected to the Board of Directors of the New York Chapter of NCGR in 2001 and where he served through 2019.
Joseph specializes in psychological and predictive astrology. Exploring the natal potential of a chart and helping people understand their path through current transits and progressions brings great satisfaction and insight to both astrologer and client.