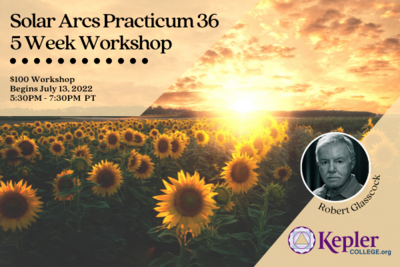 Robert Glasscock's practicums use "astrology's most successful predictive system" (Solar Arcs) to analyze and forecast developments and events in this historic American epoch leading up to the 2020 elections and now - beyond.

Students keep returning because their predictions prove accurate. Mundane astrology studies politics and political figures in the United States and the world. The practicums are a deep-dive into solar arcs techniques and forecasting.

"Feedback" through subsequently published news developments validates the scope and predictive accuracy afforded by these techniques and Glasscock's 56 years in the business.

Some knowledge of transits and solar arcs is preferred. These practicums are geared toward in-depth analysis, interpretation, and forecasting.

" is used as a standard reference for midpoint trees / interpretations.

For over 50 years (and 40,000 clients!), Robert Glasscock has been a Los Angeles-based astrologer consulting with clients from over 122 countries. For many years he authored over 250,000 words annually in “American Astrology Magazine’s” monthly and Annual Yearbook issues for Publisher Joanne Clancy. His writings for newspaper columns, magazine articles and anthologies have been cited by Liz Greene, among others.

Having begun to build his own clientele, Bob was invited to study with Linda Goodman in the ‘60s. Since she no longer saw clients (intently writing her second book), she referred her clients to Bob. He became an early member of Joan McEvers’ and Marion March’s Aquarius Workshops, lecturing there as well as national conferences and conventions. He’s been invited to address a variety of forums from the Bank of Beverly Hills’ after-work seminars to the UCLA Medical Wives Association to political, professional, media, civic and religious organizations.

"It amazes me to look back and realize, conservatively, that in 50 years I have worked with over 40,000 clients in person, by telephone, through correspondence. Often two, three, four or more a day.
“My favorite thing? Teaching. It’s such a joy to see many of my students go on to become terrific professional astrologers. Not because I’m so great. They were already good astrologers when they found me.
“But if I showed them some things they might not have learned elsewhere . . . or an approach to and philosophy of astrology that helped them find and define their own . . . then, wonderful. If I gave them something that made them better - I can say the same to them.
“Because it’s not only true that, ‘When the student is ready, the teacher will appear’ . . . it’s also true that, 'The teacher learns more than the student.'”