[Course] E310A The interplay of Religion and Astrology 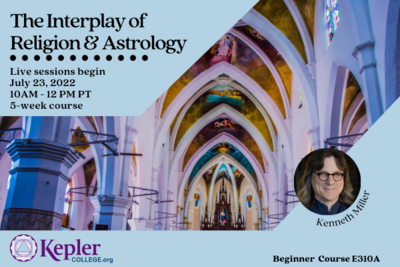 This course explores the history and development of astrological practice within the nexus of culture and religion. Is astrology a religion as it was developed in Mesopotamia and integrated into ancient Indian faiths? Or is it a science as Ptolemy tried to explain in 150ce?

We will examine the history of astrology paying particular attention to the relationship of culture, religion, and theory in astrological practice. We will explore the role of Belief in astrological meaning and expose the often unconscious religious underpinnings of modern astrological practice. A lot of religious dogma is brought into the consultation room without the conscious perception of the astrologer or client.
This course seeks to make these assumptions conscious by stripping away the dogmatic religious ideology from our everyday practice of astrology. Afterwards, you may wish to add them back into your practice, but at least now they will be conscious decisions enabling you to be a more effective astrologer.
Weekly Topics:
1. The study of religion & the philosophy of science: the religion of astrology’s birth from Mesopotamia to Alexandria to Ujjain.
2. Judaism, Christianity, Islam, & Enlightenment: Religion & critiques of astrology
3. The Reincarnation Revolution: Theosophy vs. Church of Light
4. Spiritual Darwinism and Esoteric Astrology
5. 21st century Spiritual Astrologies & The New Age
Course Objectives:
Students
• Will identify the workings of religious assumptions in their own practice.
• Will understand how culture, religion, and science combine into an astrological system.
• Will understand various techniques that spiritualize the astrological chart
• Will have an understanding of the changing concept of The Meaning of Life over time and culture.

Grading
This course is pass/no credit. To successfully complete this course (for example, you want to apply it toward the Certificate Diploma), students will be expected to:
(1) Attend in person at least 3 of the 5 live meetings
(2) Respond to all 5 weeks of discussion forums and respond to at least one other person's post per week.
(3) Apply the concepts to your own practice.

Kenneth earned his MA in Eastern and Western Traditions: The History, Philosophy and Transmission of Astrology from Kepler College. He also attended the American College of Vedic Astrology, where he achieved a Level II certification, and is certified a Jyotish Kovid from the Council of Vedic Astrology. He received his BA in Anthropology, Psychology, and Religious Studies from University of Colorado: Boulder.

After years of having his newspaper horoscope read to him by his mom, Kenneth made the shocking discovery that all the planets were involved in astrological judgments. At age 13 he taught himself how to cast a chart by hand. This began a lifelong interest in astrology and astrological traditions. He remained an amateur western astrologer studying with various teachers until the mid-1990s, when he was exposed to Indian (Vedic) astrology, and after a few years decided to make a mid-life career switch to become a professional astrologer.

In addition to Indian astrology, Kenneth has studied Modern western astrology with Helena Elizabeth Ruhnau, Hellenistic astrology with Demetra George and Robert Schmidt, Medieval astrology with Robert Zoller, and Renaissance astrology with Lee Lehman. He is one of the few professional astrologers with a working knowledge of all of these traditions.Instructor

Kenneth Miller, BA in Anthropology, Psychology, and Religious Studies from University of Colorado: Boulder; MA in Eastern and Western Traditions: The History, Philosophy and Transmission of Astrology from Kepler College; Kenneth D. Miller has an MA in Eastern and Western Traditions: History and Transmission of Astrology from Kepler College. He is currently serving as President of Kepler College and is on the board of ISAR. Awarded Jyotish Medha Shree from ICAS, Jyotish Kovid from CVA, and Levels I & II Certification from ACVA. Based in San Diego, he maintains a practice as a consulting astrologer. He is the author of Mars: Passion or Strife-The Confounding Influence of Culture on Astrology, and the forthcoming new translation/commentary of On the Bright Fixed Stars by Anon of 379 (with Andrea Gehrz).